The following is a Natural Standard Safety Update:
The U.S. Food and Drug Administration (FDA) is investigating claims that several deaths have been caused by Monster Energy®, an energy drink manufactured by Monster Beverage Corporation.
Last year, a teenage girl died after drinking two 24 ounce cans of Monster Energy® over one day. Autopsy reports showed her death was due to heart complications from caffeine toxicity. However, she had a genetic heart condition, making it unclear if her death resulted from the energy drinks.
Energy drinks are not always labeled clearly with their caffeine content. The American Academy of Pediatrics recommends that teenagers should consume 100 milligrams or less daily of caffeine. One 24 ounce can of Monster Energy® contains about 240 milligrams of caffeine, or seven times the caffeine levels in one 12 ounce can of soda.
Caffeine is a naturally occurring compound found in the leaves, seeds, or fruits of more than 60 plants. It has mood-altering properties and acts a mild diuretic. This well-known stimulant has notable effects, including increased energy, decreased perception of fatigue and improved sense of performance.
The FDA is currently evaluating the safety and dosage of the ingredients in Monster Energy®.

The following is a link to our printable Caffeine handout for distribution to patients: Caffeine Bottom Line.

Below is a list of popular Energy Drinks and links to ingredients and safety information:

DMAA is losing steam in the world of sports nutrition. Various bans throughout Europe and in Australia have pushed the ingredient off the market globally, while warning letters and negative press in the United States have prompted large retailers to shift focus to less controversial merchandise.

But what of the core consumer? What do bodybuilders and physique enthusiasts have to say about DMAA's demise? Would it have been better to leave DMAA's existence to the whims of the free market or was regulatory intervention necessary?

The 5 Worst Exercises For Your Shoulders & How To Fix Them you can access them here.

Presented simply and specifically.  I liked this and thought I'd share.

This new book brings up an interesting question.  Is the Paleo Diet good for athletes?  There is obvious benefits to injured or overtrained athletes.  The Paleo Diet has been shown difinitively to reduce inflamation and help the healing and recovery process.  Rich in antioxidants and devoid of processed foods, the Paleo diet is a great food regime to fight sickness and injury.

The question I have is in long term (greater than 90 days) use.  Will the absnence of grains, table sugar, legumes and dairy significanlty reduce carbohydrate consumption to the point of glycogen depletion?  Are the nutrients in whole grains and legumes worth eating if you are a healthy, injury free athlete?  I think they are a valuable resource.  What do you think?

Check out this new book:

Click here for the link.  Is it science or hyp?

Check out this interesting Canadian research from John Berardi "This is the third study showing positive outcomes with eggshell membrane supplements. Previous work has shown benefit in those immobilized by joint pain. And this study shows benefit in active people. Learn more in this section." Read the study: http://www.precisionnutrition.com/eggshell-reduces-pain…

No one wants to see a child going through cancer treatment.  Well, in this hard hitting article, the truth comes out and it seems most of us are ignoring it! See the link below

Well, the NASN Primary Sports Nutritionist at Mueller College went  so well on September 29th and 30th that we have immediately scheduled another one at Mueller on December 1st and 2nd.  If you feel like you wanted to go but, the timing wasn't right, now is your chance!

Free Resting Metabolic Test through Indirect Calorimetry for those who Register early! (a $100 value) 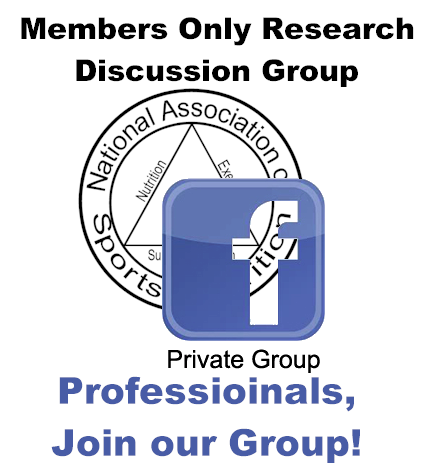